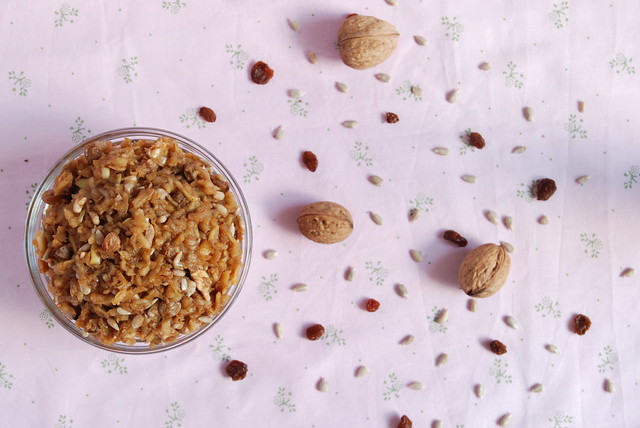 I remember the very first time I ate an apple straight from the tree. It was as if I had been in Plato’s cave my whole life and what I thought were apples were only shadows.

I was in college by the time I experienced an amazing apple, as where I grew up was too cold to have fruit trees. Fruit trees, apparently, don’t like -40 temperatures. Actually, I can’t think of any living thing that does.

There is a hardy yellow sort of apple that braves the harsh conditions, but they are rather mealy and small. Best for applesauce, they aren’t really crisp, juicy, or sweet. What takes a whole growing season in the Rocky Mountains is done by June here in Slovakia.

Now, living where tree fruits abound, I still consider it an inexcusable horror to see fruit rotting on the ground in the summer. And every single visitor I’ve had from that area of Canada has the same enthusiasm when they find pears growing on the roadside or wild plums that everyone else ignores.

Seeing as some years there is so much fruit that they don’t know what to do with it, I guess it’s only natural that distilled fruit alcohol abounds here, including apple. 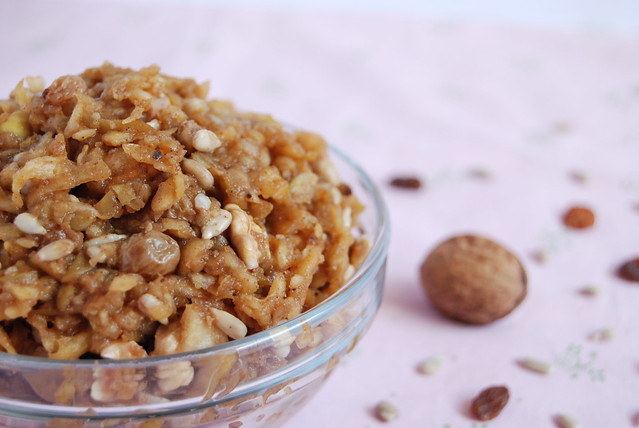 I am not exaggerating when I assert that if you want to start eating fermented foods and have a hard time starting, this fermented spiced apple chutney is the one to start with. Because of the apples, raisins, and spices, it’s still quite sweet by the time it’s ready to eat.

Only the knowledge that my kids need probiotics as well was able to stop me from eating the whole bowl. Barely.

Eat it with yogurt or cream, on pancakes or crepes, as a jam substitute, or just plain. It tickles me pink to think of something so delicious as being also so good for you.

Even though we think of apples as a fall and winter food, this apple chutney is perfect for those over-wintered apples that are no longer in their prime. Early in the spring, they are still the only local fruit.

Inspired by the Five-Spice Apple Chutney from Gnowglins, I’ve adjusted the spices and method. If you don’t have whole spices, just toss in a few pinches of each of the spices. I’ve used both water kefir and brine from fermented veggies (sauerkraut, cauliflower, daikon) and have to say that the brine gives a richer flavour, although the water kefir works as well. 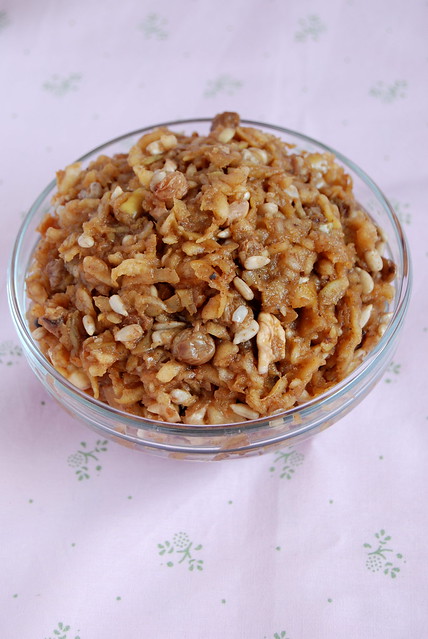 Put the whole spices in a spice grinder and grind until fairly smooth.

Grate, chop, or chop up in food processor the apples, still with the peel on.

Mix apples in a large bowl with all ingredients but the last two (water and salt). Knead the mixture a bit, then fill and press down into jars (2 quart jars or equivalent). Pack in as well as you can.

Dissolve salt in water and pour enough to cover the apples by about an inch/2cm. You may need more or less than one cup of water, depending on the size of your jars, but keep the ratio of 1 cup water to 1 tsp salt.

Cover with a tight lid. Let sit at room temperature 2-3 days, then transfer to fridge. This does produce a lot of pressure, so make sure to burp the lid now and then.

Eat and marvel that you’ve created food teeming with good for you bacteria that tastes so good!